We recently marked monsoon in Delhi with the IIC Monsoon Festival of Dance at the India International Centre. It was a smartly edited program focusing on Expressions of Abhinaya in Classical Dance. The artists for the evening were Purvadhanashree performing Vilasini Natyam and Padma Shri Madhavi Mudgal performing Odissi.

Vilasini Natyam was a new form for us but the background to this style of dancing is intriguing. Vilasini Natyam was performed by Devadasis in the temples of South India. They would dance for the Gods, the royalty as well as in public. Their repertoire included dances of worships, amorous dances as well as dances depicting social causes. Devadasis were a socially repressed group and the Devadasi system was banned by law just after Independence in India. Sadly, along with the Devadasis, their exquisite arts also went into oblivion. There is presently an effort to revive the dance of the Devadasis and Swapnasundari is studying this ancient form and training students.

Purvadhanashree, a student of Swapnasundari, presented the Vilasini Natyam for audience in Delhi. She had great stage presence and the various pieces she presented relied heavily on Abhinaya or histrionics. The artist was effortless and she could distinguish for us the Vilasini Natyam from other close classical dance forms such as Kuchipudi or even Bharat Natyam which had also originated as temple dance. The live instrumental and vocal support on stage was a performance on their own and we loved the voice of the vocalist.

Padma Shri Madhavi Mudgal is a maestro in Odissi and well known in classical dance circuits. We have seen her perform before and have always been impressed with the ease of the veteran dancer with her skill. Mudgal was at the top of her act at IIC too when she presented pieces from the Geet Govinda, Amarushatakshm and an Oriya song. Every little movement on stage conveyed so much. We are just back from Khajuraho and at times she reminded us of the carvings on the temples. Some of the recorded music she used was in the melodious voice of Pandit Madhup Mudgal. In one piece, Guru Kelucharan Mahapatra, credited to have brought Odissi to the stages, had played the pakhwaj drum. We missed a music ensemble on stage, but Mudgal had apologised at the outset for not having live accompanists. The artist’s practice and experience clearly came out during the performance and we were once again humbled by seeing a pro in action.

It was once of the best classical arts recitals we have had in recent times. Such experiences make us look out for more events like the IIC Monsoon Festival of Dance. Trust us; it does not need an art critique to enjoy these programs. 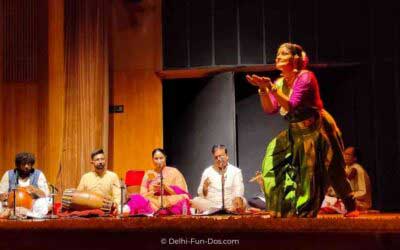 In Search of Infinity – Bharatnatyam by Geeta Chandran

Padma Shri Geeta Chandran, the noted Bharatnatyam exponent, recently shared her pandemic positive story, through a compilation of pieces In Search of Infinity. We have been huge admirers of her work. Moreover, we were happy to attend a live dance program and go back to India Habitat Centre after a gap of 2 years.

A simple guide to New Year Events in Delhi

With the changing weather, Delhi suddenly experiences a surge in events, festivals and happening dos all over the city. It is the season to be out, to be merry and Delhiites know how to make the most of the chill. On one hand some are making plans to visit Goa for New Year Party. On the other hand, some are looking for New Year Events in Delhi. No matter what’s your poison, here is what we got to say on the topic.

The first ever Trigart Kangra Valley Festival organised by Department of languages and culture, Himachal Pradesh Govt. is a month long festival of classical, contemporary and folk arts. One of the highlights of the event was classical dance and music performances by the stalwarts. Read on to know more about this festival.