Ancient Temples of Naggar in Kullu

Naggar is a piece of Himachali haven in Kullu 25 km before Manali. On a first look, Naggar can seem like a hip tourist spot. When we spent some days here, we discovered the eclectic Naggar slowly. Naggar is a heady mix of natural beauty, and cafes, and ziplines and treks, and goes without saying the glorious temples of Naggar that date back at least 1000 years.

Naggar is an eclectic mix of interests for any traveler.  There are a variety of things to do in Naggar that would work for all sorts of tourists and travelers. Though we were especially bowled over by the temples of Naggar, and unknowingly end up doing a temple trail of Naggar during our morning walks, treks, and evening stroll.

If you are in the vicinity, the temples of Naggar are not to be missed not only for their sense of divinity but also for their beautiful architecture. These temples are also a great reflection of the God-fearing Kulwi culture, their art, craft, and daily practices. 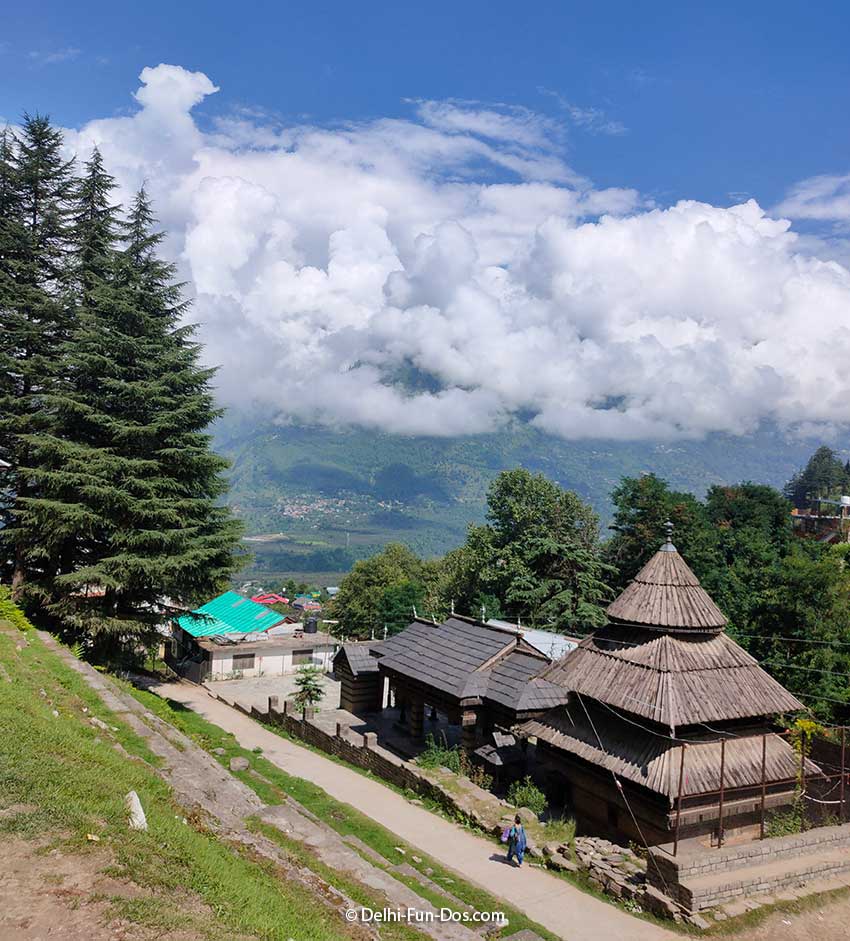 Tripura Sundari Temple is an 11th century-old temple that has not been written much about or heard much from the tourists. The wood carvings on this pagoda-style shrine were exquisite, and indescribable in words. Wood chimes hung from the edge of all roofs. We could only imagine how musical this place would be on a windy day. No wonder we saw some movie being shot here that involved Bollywood actor Sunil Shetty. 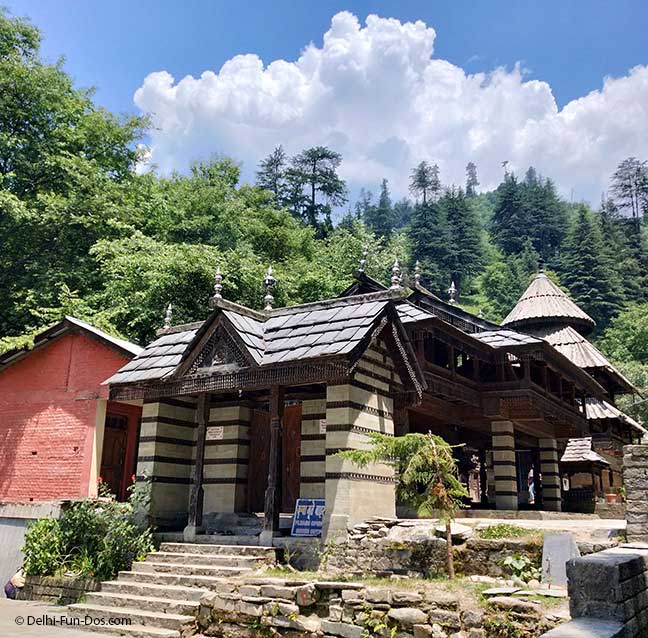 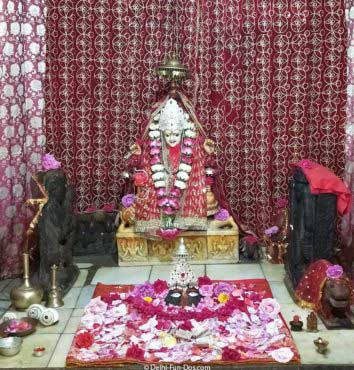 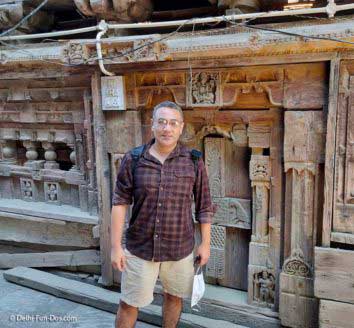 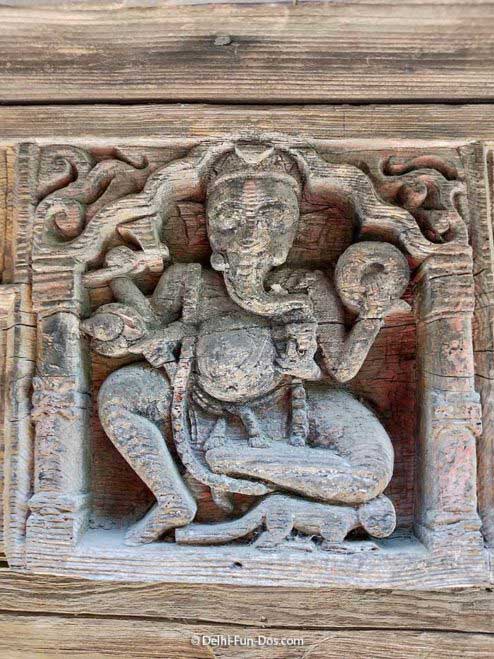 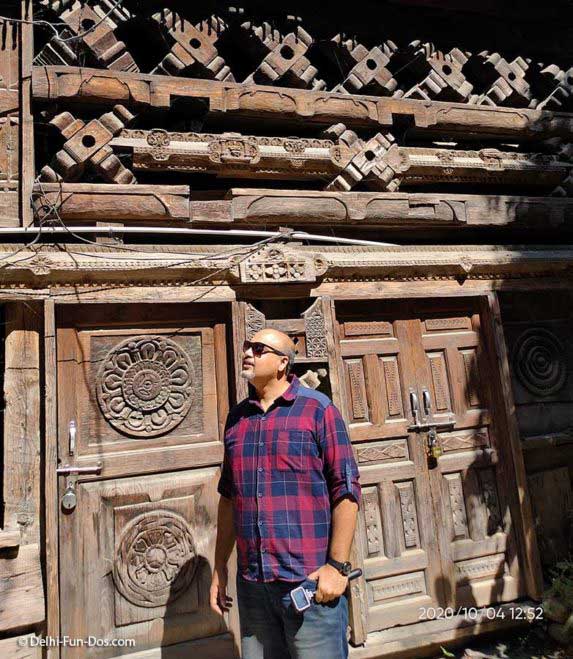 Tripura Sundari is a rare aspect of Goddess Durga. Tripura Sundari temples are found in Udaipur in the state of Tripura; Boral in Kolkata and Naggar in Himachal. In iconography, she is a 16-year-old female with four arms. She is seated on the reclining Lord Shiva. The marble Tripura Sundari in Naggar was covered in a gold-red scarf or chunari. The Goddess wore a peaceful smile. The idol was the epitome of regal grace.

We could hear the melodious Nagara horns and Himachali drums being played in ode to the Goddess every evening. This Divine Lady was virtually our neighbor during our stay at Naggar. 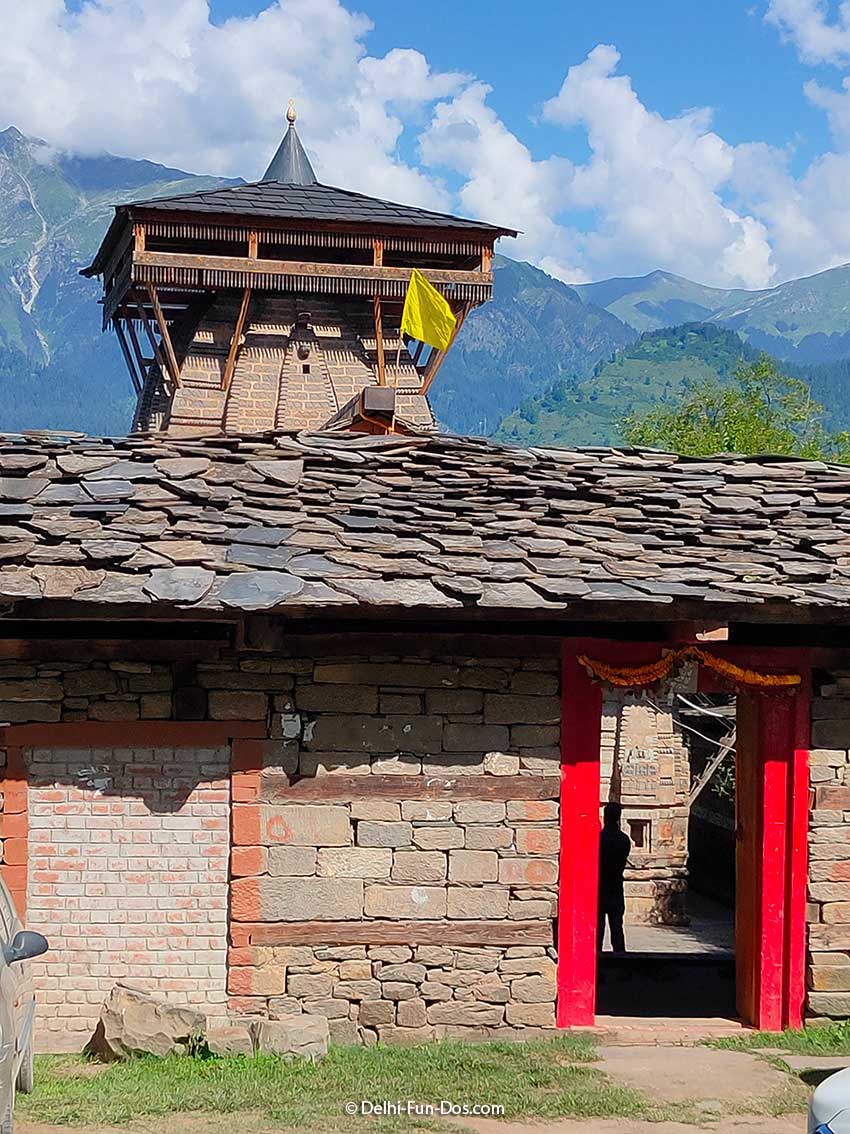 We celebrated Janmashtami at the Muralidhar Krishna Temple in Naggar. We hiked from our hotel (Hohinoor Heritage Resort) and saw an intricately carved stone temple in the Shikhara-style temple architecture of Himachal Pradesh.

There was a bit of a climb. Till some years ago, hiking up was the only way to reach Muralidhar Krishna Temple. However, a motorable road to the temple has been built. But given that it was Janmashtami, we wanted to do it the traditional way, on foot.

We were so rewarded not only by way of the beautiful shrine but also by a breathtaking view of the valley. Also, much to our pleasure, in keeping with the nippy air in the morning, steel cups of chai were offered to us and we gladly accepted as prasad. 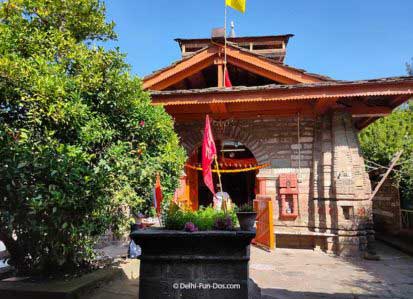 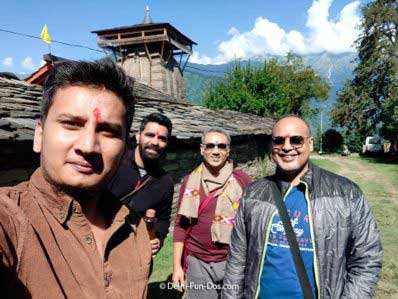 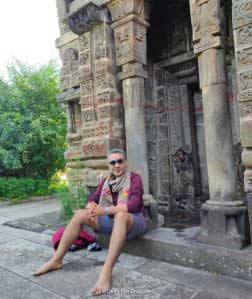 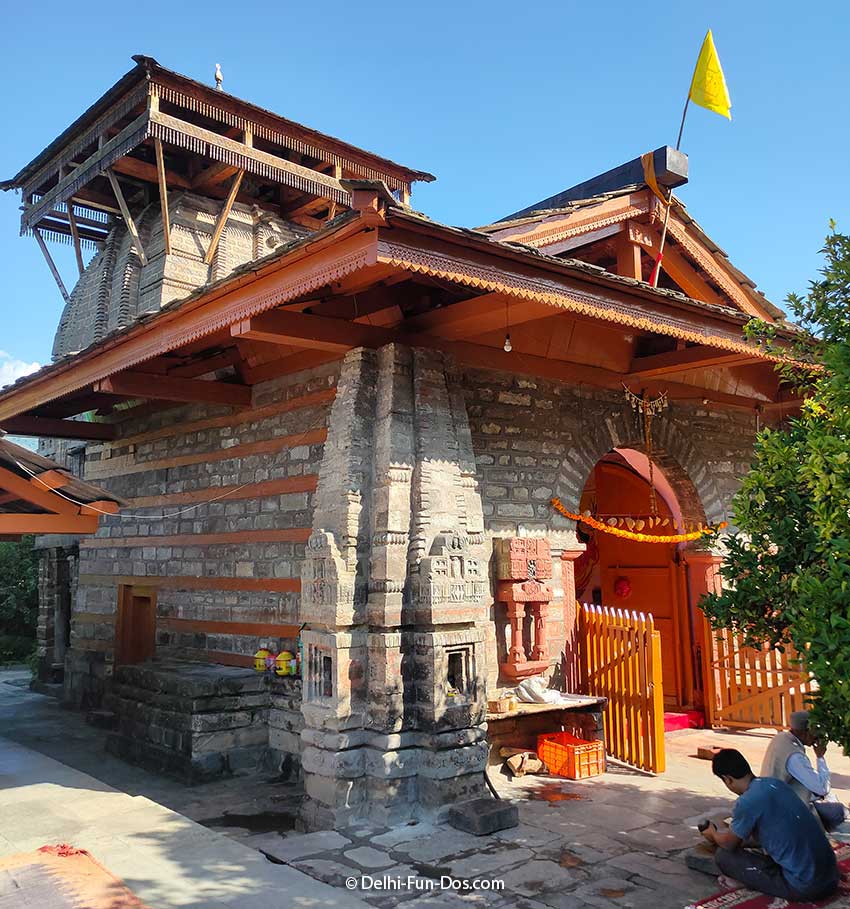 The Muralidhar Temple housed statues of Krishna and Radha. There were other smaller statues too. The black Krishna statue was about one and a half feet and stood straight like a little child. He wore a bemused expression on his face. Radha too was full of matter-of-fact attitude. The idols were unlike the slightly inclined and more dreamy Krishna statues of Vrindavan. We suspect that is the local influence of the mountains where life is hard when compared to that on the plains. 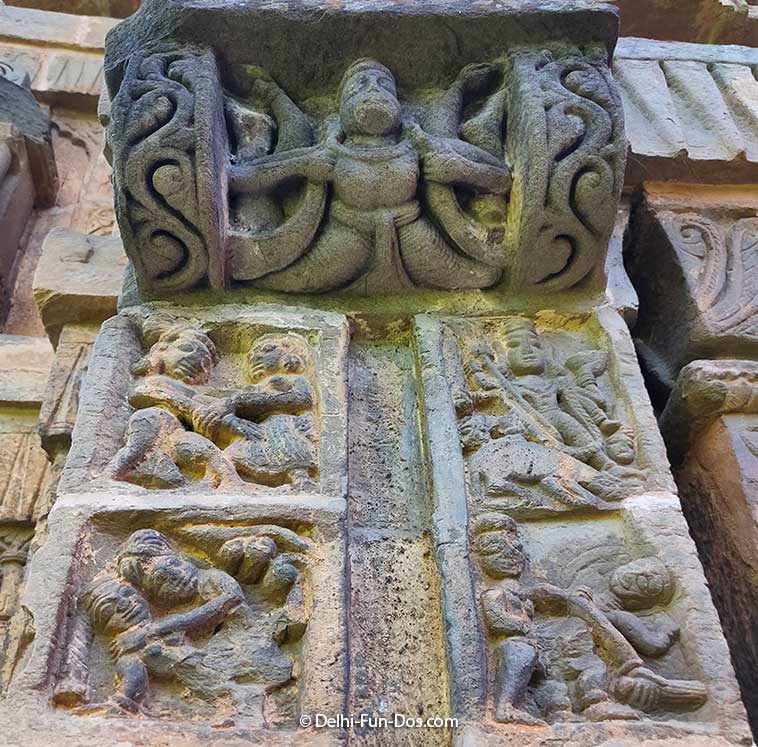 Talking about time, we asked the priest about the age of this temple. He said that it was old – and was there from the times of Mahabharata. Romantic as that sounds, from a little research and given the other temples of this area, we understand this temple was built during the 10th to 11th century. It is therefore a very precious gem not only in the history of Himachal Pradesh but all of India. But then India is so full of such gorgeous remnants of history that a lifetime is not enough to explore Incredible India! 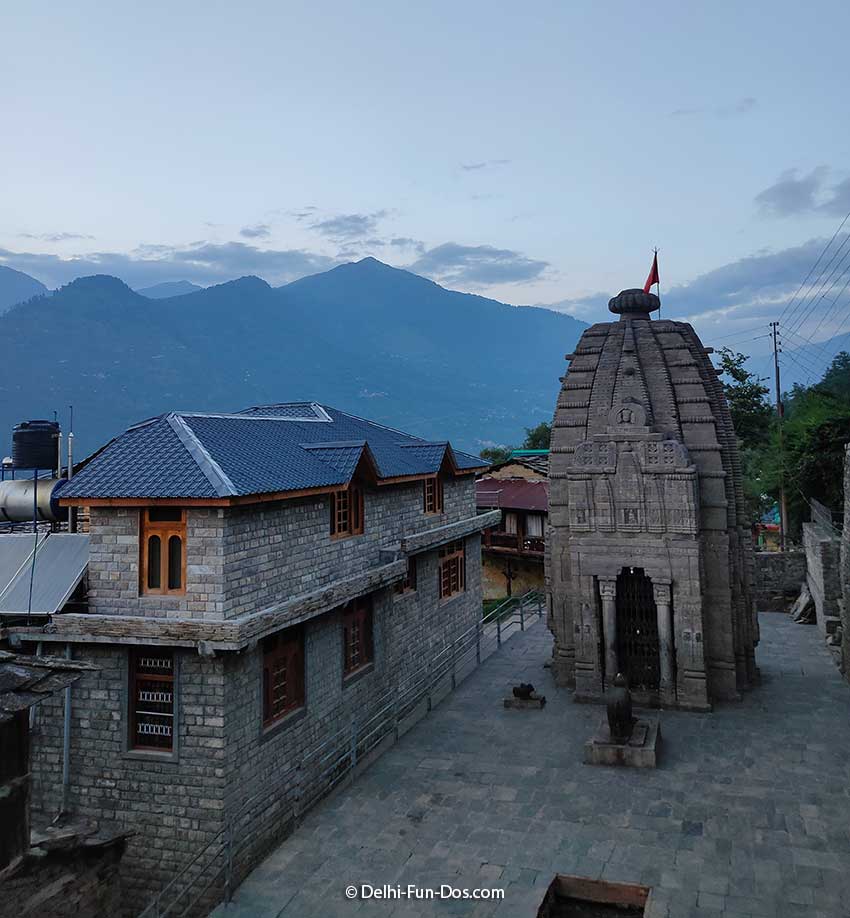 Gauri Shankar temple carried a beautifully carved stone plaque of Lord Shiva and Parvati. Typical to a Shiva Temple, a strong black Nandi Bull statue faced the door of the sanctum sanctorum. It must have been a very generous Nandi since we saw many devotees whispering their wishes in Nandi’s ears. 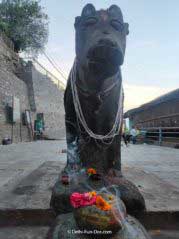 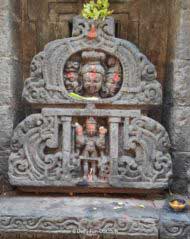 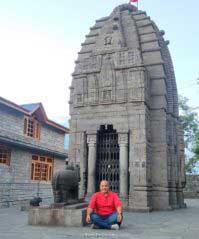 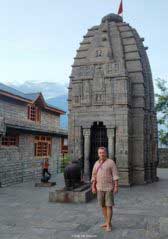 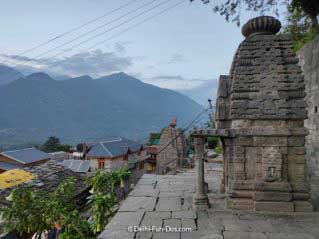 Like the Muralidhar Temple, the Gauri Shankar temple was carved in Shikhara style and we saw smaller shrines in the vicinity. The main shrine had some design carvings on the outer walls. However, this was spartan when compared with the Muralidhar temple. Whether the temple was designed to bear a stark look or whether the carvings had worn off with time, we cannot say. This temple was now under the aegis of the Archaeological Survey of India (ASI). 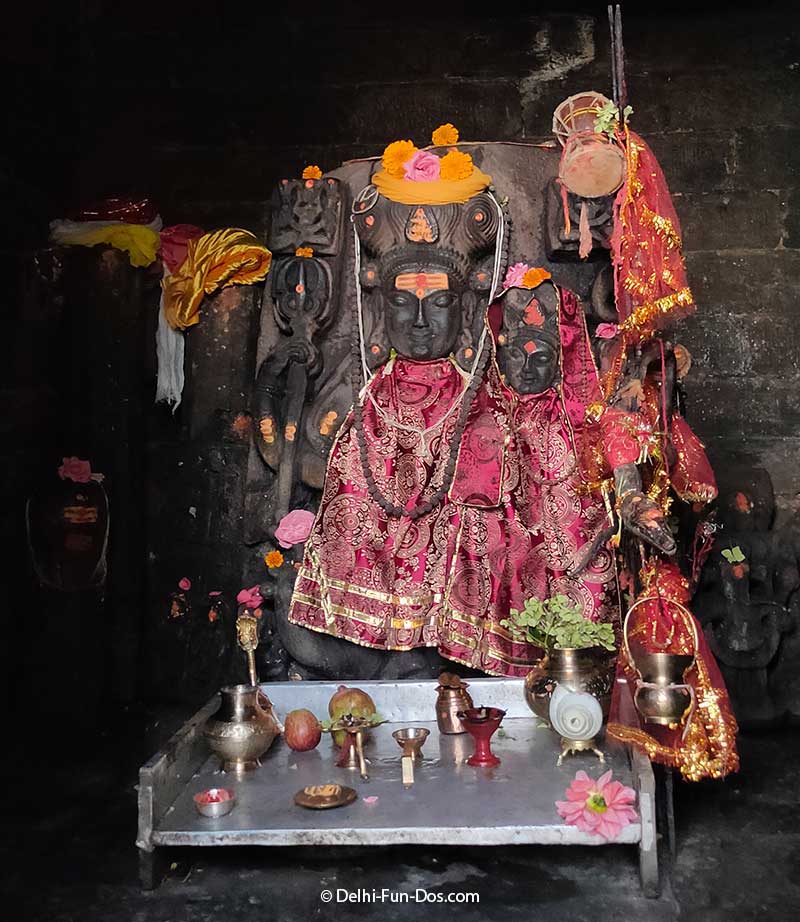 Once again, the Shiva-Parvati plaque is so contemporary, so quixotic, yet so divine that it gives us goosebumps as we write this post. The Gauri Shankar Temple was about a 5-minute walk on the road adjacent to Naggar Castle. It is a must-visit. 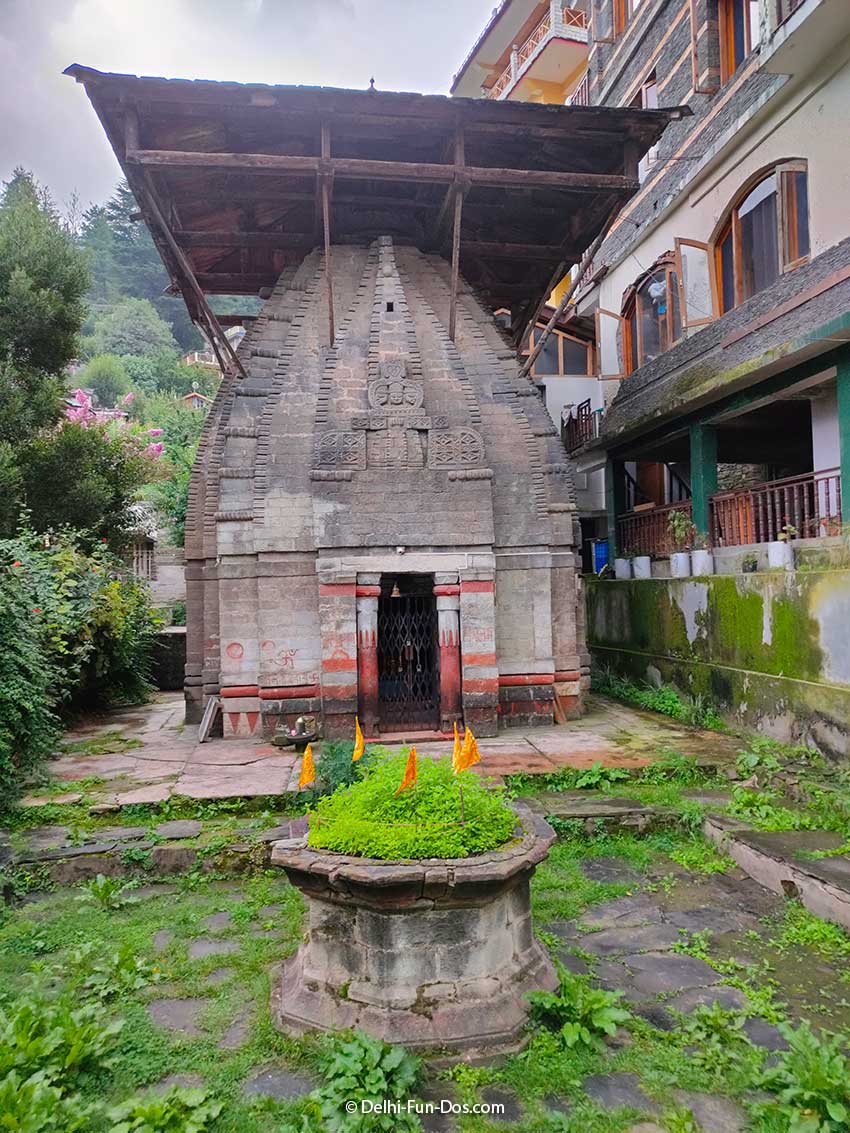 We spotted this stone-carved temple from the balcony of Naggar Castle. It was a few meters away from Naggar Castle. This temple was tucked inside among concrete structures and could easily be missed.

The Chaturbhuj Temple was also constructed out of stone in Shikhara style. However, it was less adorned than other temples. The regal statute of the four-armed Vishnu in the sanctum sanctorum compensated for the lack of ornamentation outside. 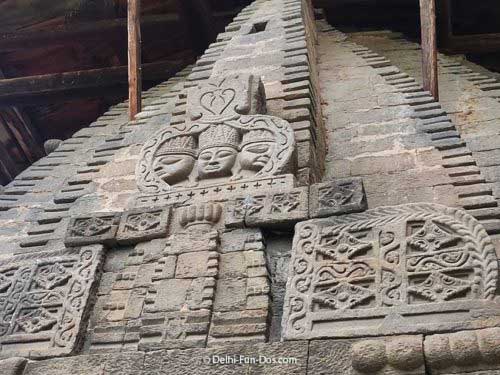 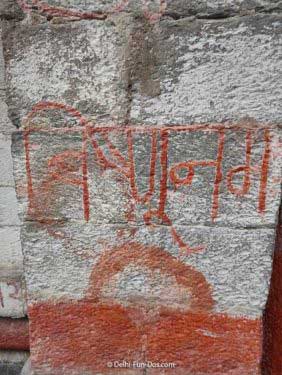 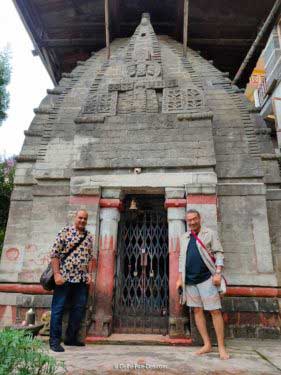 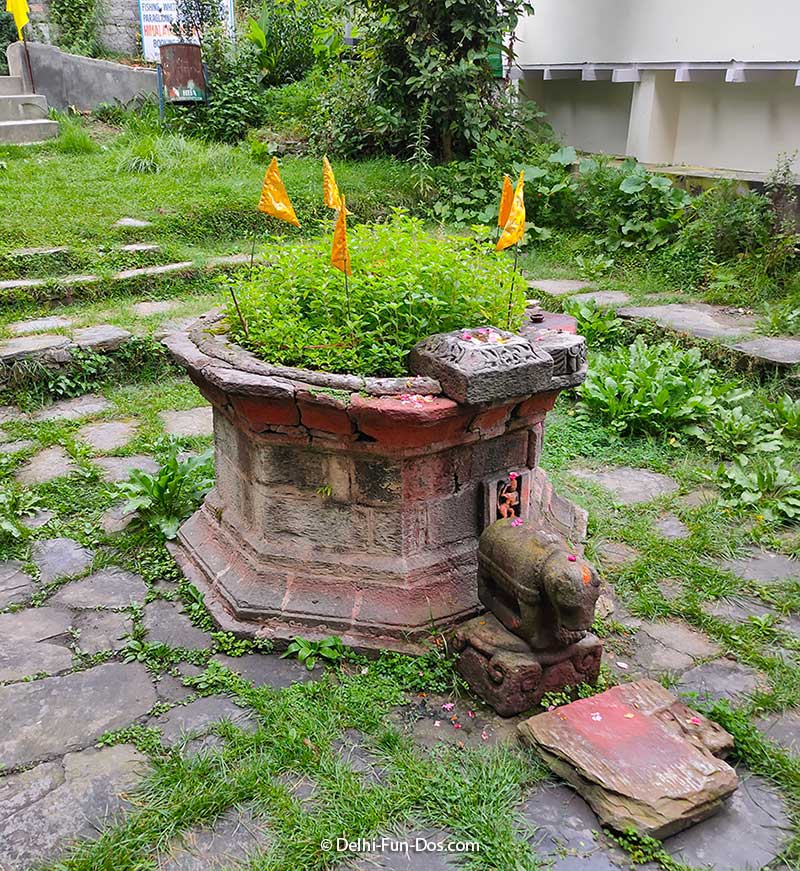 Given the similarity among the Muralidhar, Gauri-Shankar, and Chaturbhuj Temples in terms of shape and building style, it appears to have been constructed by a single dynasty in the same era. 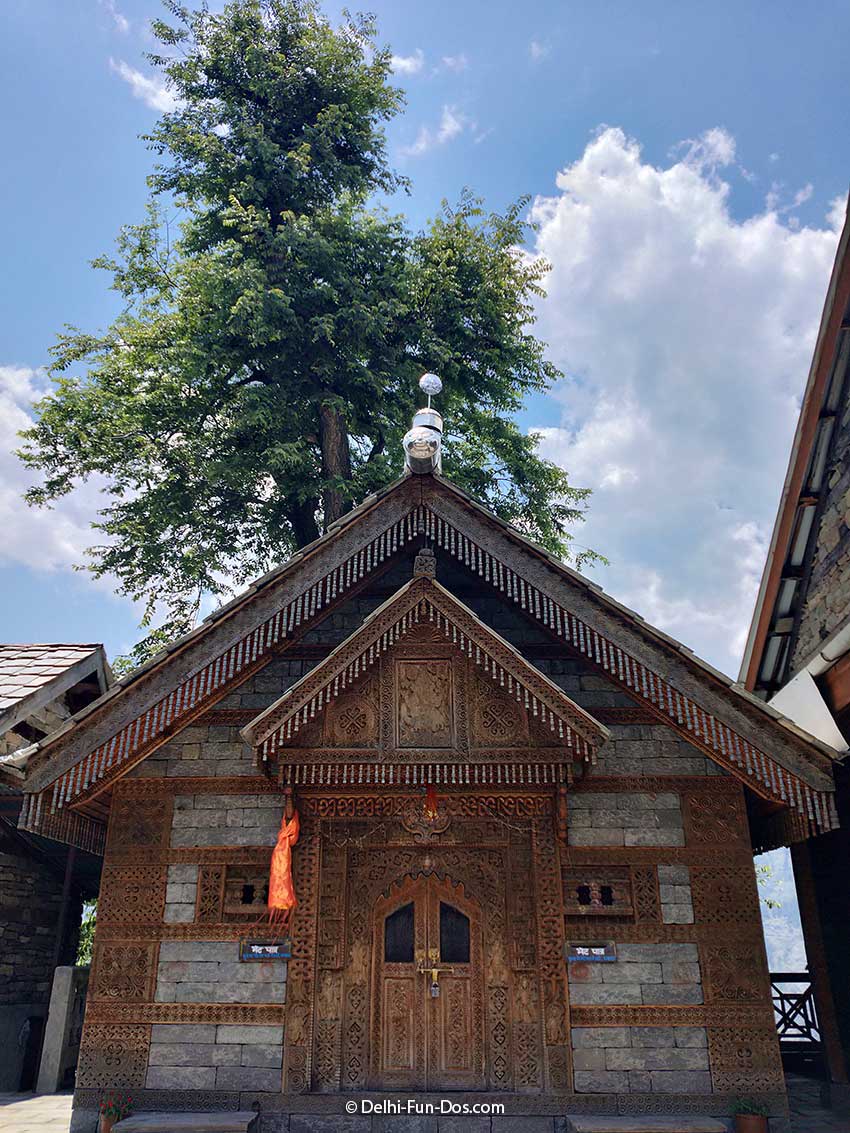 Why is Himachal Pradesh a hub of divinity? And how are the temples of Kullu so important in the history and culture of India? 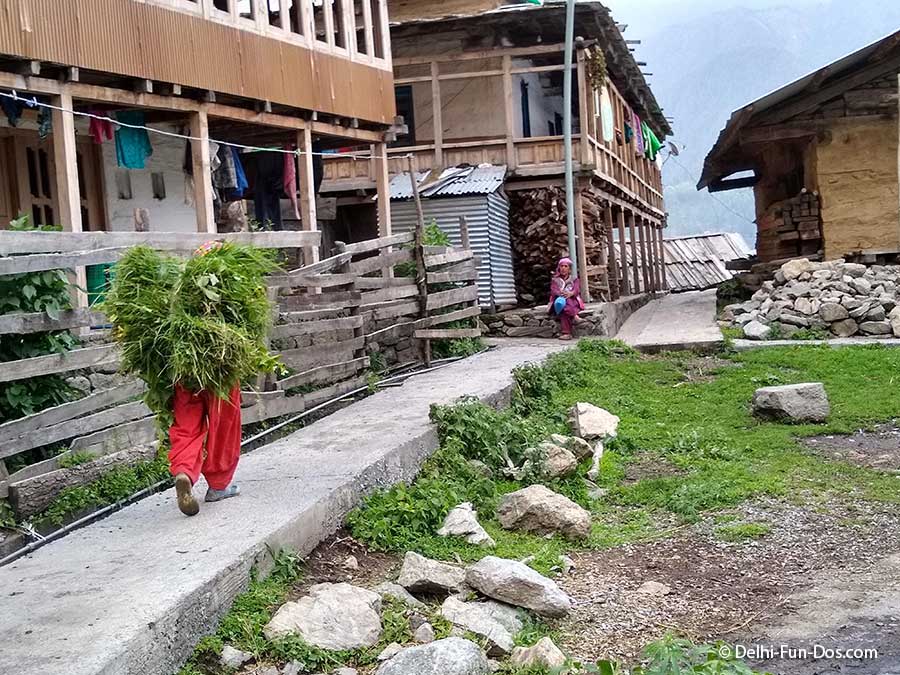 Himachal Pradesh especially regions like Kinnaur, Chamba, and Kullu have been inhabited since ancient times. References to Kullu can be found in our epics Ramayana and Mahabharata. Hidimba, the Demon-consort of Pandav Bhim was the daughter of Kullu. Legend has it she hailed from Manali, or what was then known as Manu-alaya or Home of the sage Manu. This explains the grand Hidimba Temple and Ghatokach temple in Manali. The Chinese scholar-traveler Hiuen Tsang (Xuanzang) is said to have visited Kullu as well during the course of his travel across India.

Naggar, as we discussed above, is replete with ancient temples, one more gorgeous than the other. We could not find specific mythological references to the temples of Naggar in Kullu. We attribute that to the lack of the habit of documentation of history in ancient India. Most of these temples may have been built during the Pal dynasty. The Pal dynasty ruled Kullu till the 15th century whereafter it was ruled by the Singh dynasty.

How to reach Naggar from Delhi

Delhi to Naggar is approximately 514 km. Naggar is 20 km short of its more popular cousin Manali. A drive from Delhi to Naggar should take approximately 12 to 14 hours. Word of caution, massive road repairs are underway in Himachal Pradesh. Moreover, landslides are common in monsoon months. If you are not confident with hill driving, you should hire a taxi or a driver proficient on mountain roads.

We took the Himachal Pradesh Tourism Development Corporation (HPTDC) bus service for Manali. The bus was clean and comfortable. We dropped at Patlikuhal and Naggar was 10 minutes drive from there. The nearest railway station is Jogindernagar and the nearest airport to Naggar is Bhuntar in Kullu.

All the temples listed on this post are in Naggar. You can visit all the temples in a single day, and on foot, if you so choose. The Muralidhar Krishna Temple may be a difficult hike for seniors or folks with mobility issues. For them, we suggest the new driveway. This way you reach the doorstep of the temple in your vehicle.

A part of our Naggar trip, rather inadvertently, became a temple trail.  We covered all the temples on foot. All the temples were very clean. The locals sporting colorful Kullu caps, and women in Himachali Pattu drapes added beauty to the solemn temple settings. Standard Hindu temple protocols are applied here. That meant shoes were not allowed and one was expected to maintain peace and quiet.

The temples were our most mesmerizing discovery of Naggar. Even if you are not religious, the temples of Naggar deserve a dekko for their sheer brilliance carved more than 1000 years ago. No wonder, Himachal Pradesh is still “Devbhumi” or Home to the Gods. 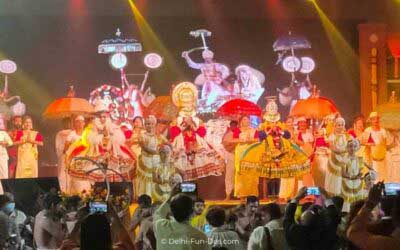 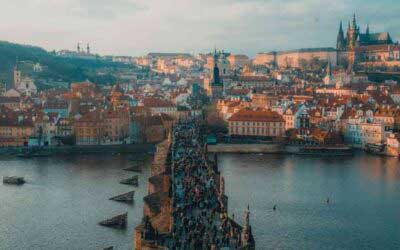 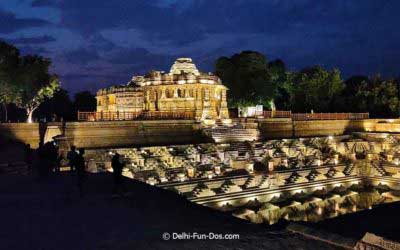